Alberta sculptor and illustrator Jason Carter was commissioned to create this artwork for Now Magazine.(Jason Carter)

An Alberta Indigenous artist is apologizing after his artwork, depicting a bear wearing a marijuana leaf headdress, sparked controversy for a Toronto magazine. 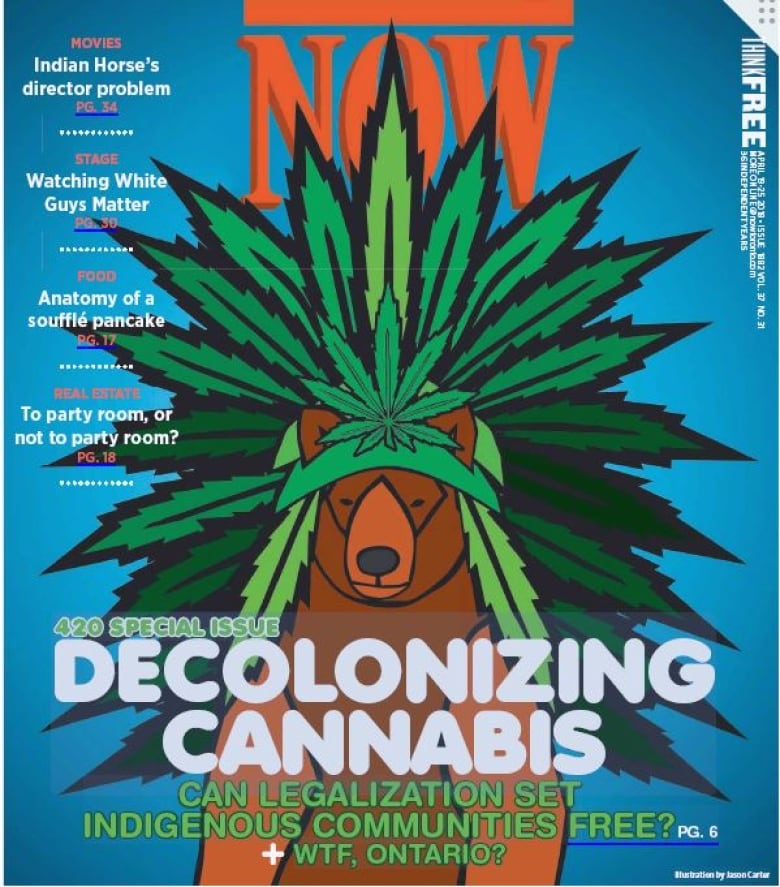 The cover art Carter created for the magazine has been the target of numerous complaints. (NOW Magazine/Jason Carter)

Carter was commissioned by Now Magazine to create artwork for its latest edition to accompany a feature article on legalization. Titled Decolonizing Cannabis, the article explores the impact of legalization on Indigenous communities.

Both illustrations feature a bear wearing a headdress made, not of eagle feathers, but of large marijuana leaves.

"They wanted to use an Indigenous artist because they knew it was going to be a sensitive issue, and I jumped at the chance," Carter said. "I really wanted to play with the iconography of the bear and the headdress. It went through a few evolutions, but ended up there with something simple and effective to get people talking."

The prints were the subject of dozens of complaints on social media. Some readers described the art as racist or insulting, with criticism targeting the magazine for trivializing headdresses, which are considered sacred objects.

"You say that one of the core 'visions' for your company is empowerment of all," reads one complaint from Kaylee Juniper on Twitter. "This cover is not empowering, regardless of the material contained within, it is insulting and diminishing.

"You would do well to apologize immediately and pull this issue."

Carter said the art was not intended to be offensive, but a playful exploration of cultural symbols.

While he is apologetic to those he offended, Carter said he has no regrets about his work. Indigenous people should feel empowered to explore their own culture through art, he said.

If Indigenous artists can't use Indigenous iconography in art who can, he wonders.

"I think it's important to reclaim that iconography, that Indigenous iconography," Carter said. "As an Aboriginal artist, feeling that I can't explore that sort of subject matter feels a bit silly to me."

The magazine issued a statement on its official Twitter account on Friday acknowledging the controversy, clarifying the collaboration efforts with Carter and thanking readers for their "continued response."

Youngest Jonas Brother Cited for Pot Possession
As reported by TMZ, Frankie Jonas, also known as the “Bonus Jonas,” a sixteen-year-old brother of Joe, Nick, and Kevin Jonas, was busted for cannabis possession. It happened on Tuesday night, Nov. 22, 2016, outside of a convenience store in Nashville, Tennessee. The source says he got caught with some illegal marijuana on him.

Tommy Chong Releases Designer Marijuana Strain
Tommy Chong is a globally known marijuana icon. He has had lots of ups and downs in his standup comedy career and movie roles that were oriented at the cannabis culture. Besides working in the entertainment industry, the celebrity was an entrepreneur during the “gray market” days.

Former Football Superstar Ricky Williams Promotes Marijuana As Effective Painkiller for NFL Players
​Ricky Williams is on the list of the most recognizable and famous football players in the whole world. In 1998, the running back from the University of Texas won the Heisman Trophy. Ricky Williams is the guy the New Orleans Saints traded for, and the price was really high—they gave up every one of their picks in the NFL draft of 1999 (plus three drafts in 2000). This is considered to be one of the most irrational and infamous draft moves in the whole history of NFL.